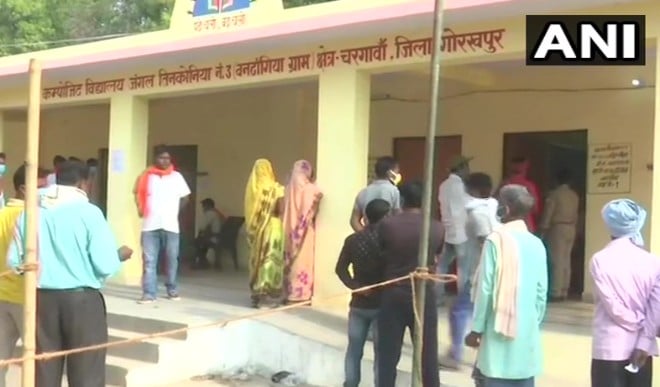 Lucknow. Uttar Pradesh On Saturday, the candidates filed their nomination papers for the elections to the posts of District Panchayat President. However, as only one candidate is in the fray in 18 districts, he is sure to be elected unopposed. The State Election Commission had fixed the date for filing nomination papers for the election of District Panchayat President in all 75 districts of Uttar Pradesh on Saturday (June 26). According to the news received in various districts of the state, Bharatiya Janata Party (BJP), Samajwadi Party Independent candidates including Party (SP), Apna Dal (S) and Rashtriya Lok Dal (RLD) have filed their nominations. According to the statement issued by the State Election Commissioner late on Saturday night, the nomination of only one candidate has been found valid in 18 districts. These districts are Meerut, Ghaziabad, Gautam Budh Nagar, Bulandshahr, Amroha, Moradabad, Agra, Etawah, Lalitpur, Jhansi, Banda, Chitrakoot, Shravasti, Balrampur, Gonda, Gorakhpur, Mau and Varanasi.

On this basis, it can be assumed that the candidates of these districts are sure to be elected unopposed. Meanwhile, SP President Akhilesh Yadav tweeted, “The way the BJP government has stopped the Samajwadi Party candidates from filing nominations for the Panchayat President’s election in Gorakhpur and elsewhere, it is a new administrative tactic to win the election of the lost BJP. . The people will not even give him as many seats in the assembly as the BJP will make panchayat presidents. According to the information received from Gorakhpur, BJP candidate Sadhna Singh has filed her nomination. He is likely to win unopposed as the SP candidate could not file his nomination. According to information received from Kaushambi, Kalpana Sonkar from BJP and Vijma Diwakar from SP filed nominations for the post of District Panchayat President. No candidate from BSP filed nomination. According to the news received from Ballia, today Supriya Chaudhary of BJP and Anand Chaudhary of SP filed their nomination papers for the post of District Panchayat President in Ballia. Suheldev Bharatiya Samaj Party has given its support to the SP candidate.

In Baghpat, the loyalty of the candidate changed several times in a day for the election of the District Panchayat President. Mamta Kishor, who was the candidate of Rashtriya Lok Dal (RLD) in the morning, had joined the BJP, but after a few hours she has returned to the RLD. Here RLD has nominated Mamta Kishore and BJP has nominated Babli Devi. Mamta Kishor says that she was forcibly given membership of BJP but now she has returned to her home. In the prestige election for the post of District Panchayat President in Etah, today the candidates of SP and BJP filed their nominations for the post of President. Here, the former SP candidate Rekha Yadav presented her nomination paper in front of District Election Officer Ankit Agrawal located at Collectorate.

At the same time, Vinita Yadav is the candidate for this post from BJP. Geeta Devi has also filed her nomination paper for the post of District Panchayat President. Bhadohi District Magistrate Aryaka Akhouri said that Amit Kumar Singh alias Prince has filed for the post of District Panchayat President as the official candidate of BJP and Anirudh Tripathi and Chandra Bhushan Tripathi have filed their nominations as independent candidates. On the other hand, Samajwadi Party state president Naresh Uttam has removed party presidents of 11 districts from the post. According to the statement issued by the party, the district presidents of Gorakhpur, Moradabad, Jhansi, Agra, Gautam Budh Nagar, Mau, Balrampur, Shravasti, Bhadohi, Gonda and Lalitpur have been removed. According to party sources, these are the districts where SP candidates could not file their nominations. State Election Commissioner Manoj Kumar said that the candidates can withdraw their nomination till June 29. He said that on July 3, polling will be held from 11 am to 3 pm and after that the counting of votes will take place.

According to a statement issued by the State Election Commissioner’s office, senior administrative officers have been deployed as observers in all the districts of the state to make the voting and counting of votes for the posts of District Panchayat President, District Panchayat free, fair, transparent and peaceful. has gone. Kumar has directed the deployed observers that the concerned observers must reach the headquarters of their posted districts by the forenoon of July 2 and provide written information to the commission. He has also directed the observers to reach their posted district headquarters and meet with the concerned officers about the proper preparations for voting and counting, and ensure necessary arrangements for conducting fair, transparent, free and peaceful elections. He said that the observers posted in the respective districts should be ensured. Make sure to inspect the preparations made in it and if any serious problem and irregularity is reflected then it should be brought to the notice of the commission immediately.