TMC MP snatches copy of statement from IT minister in Rajya Sabha, breaks it into pieces and waved it in the air, government in mood for big action 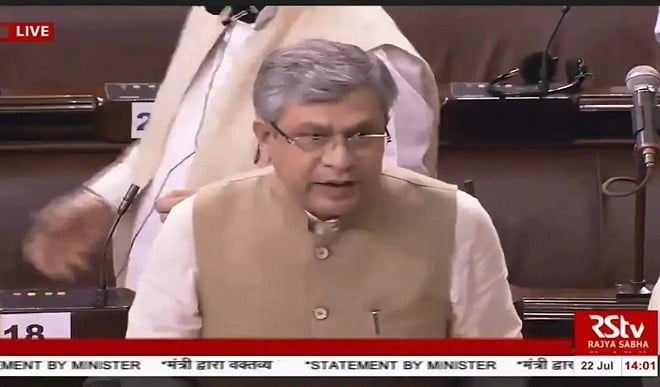 New Delhi. The government will move a resolution in the Rajya Sabha on Thursday to suspend Trinamool Congress (TMC) MP Shantanu Sen for snatching papers from Union minister Ashwini Vaishnav. Sources gave this information. He said some opposition MPs “misbehaved” with members of the ruling party, including a minister, even after the House was adjourned. Sen snatched the paper from the hands of Information Technology and Communications Minister Ashwini Vaishnav during the proceedings in the Rajya Sabha and threw it into the air. Vaishnav was giving a statement in the Upper House at that time on reports about spying of Indians through Pegasus software and allegations of opposition in the matter. Sources said the government will present a proposal to suspend Sen on Friday. Union Minister V Muraleedharan is expected to move the motion. Requesting anonymity, a Union minister said, “We are approaching the Chairman of Rajya Sabha seeking action against them (opposition MPs) as their behavior is detrimental to parliamentary decorum.”

Also read: JP Nadda said on the election scandal in Rajya Sabha, TMC’s old history of working against the dignity of Parliament

Sources said Leader of the House in Rajya Sabha Piyush Goyal and Union Minister Mukhtar Abbas Naqvi reached out to the opposition members and assured them that the minister would answer their questions after giving his statement, but it did not make any difference. When Vaishnav could not read the entire statement, it was laid on the Table and after that the house was adjourned. However, the situation in the House remained tense due to a heated argument between the two sides. Shantanu Sen has alleged that Union Minister Hardeep Puri abused him in the Rajya Sabha and he was about to beat up, but his colleagues saved him. The ruling Bharatiya Janata Party (BJP) has condemned the conduct of the opposition in Parliament.

TMC MP snatched copy of statement from Vaishnav, broke it into pieces and waved it in the air

A Trinamool Congress member snatched paper from the hands of Information Technology and Communications Minister Ashwini Vaishnav and threw it into the air during proceedings in the Rajya Sabha on Thursday. Vaishnav was giving a statement in the Upper House at that time on reports of spying of Indians through Pegasus software and allegations of opposition in the matter. After two adjournments, as soon as the proceedings of the House began at 2 pm, the Deputy Chairman, Harivansh called out the name of the Vaishnav to make a statement. At the same time, members of the Trinamool Congress and some opposition parties came near the podium creating a ruckus and raising slogans. Meanwhile, Trinamool Congress member Shantanu Sen snatched the copy of the statement from the hands of the Union Minister and threw it into pieces. In this situation Vaishnav laid the copy of the statement on the Table of the House. Deputy Chairman Harivansh requested the rioting members not to behave in unparliamentary behavior, but when they were not listened to. He remarked, “Please this unparliamentary tradition… The report we wanted to hear… are not allowed to be debated… What democratic process is this?” Copies of the reports of the Parliamentary Committees were laid on the Table of the House. This legislative business could not take place due to the uproar. He then adjourned the proceedings of the House for the day. However, the statement made by Vaishnav in the Upper House was more or less in line with the statement made in the Lok Sabha. According to this, Vaishnav vehemently refuted the reports about the alleged spying of Indians through the Israeli spyware Pegasus, saying that the publication of such a report just before the monsoon session of the Parliament is not a coincidence, but the allegation is to tarnish the image of Indian democracy. are efforts. He said that when there is already a system of control and surveillance in the country, then illegal surveillance by unauthorized person is not possible. Union Minister Vaishnav said that on July 18, a web portal published the news of alleged espionage and this press report came to the fore just a day before the monsoon session of Parliament began on July 19. This cannot be a coincidence. Vaishnav said that the press report dated 18 July 2021 seems to be an attempt to tarnish the image of Indian democracy and an established institution. He said that claims of Pegasus being used on WhatsApp had surfaced in the past but these reports have no factual basis and have been denied by all parties. An international consortium of media outlets has claimed that Israel’s spy software, sold only to government agencies, could have accessed more than 300 mobile numbers of a large number of businessmen and human rights activists, including some of India’s most influential people. that have been hacked. Even before this, the opposition parties had created ruckus in the House on various issues. Due to this the proceedings of the House had to be adjourned twice. The protesting opposition members raised slogans in the House on some other issues, including the Pegasus espionage controversy.

Share
Facebook
Twitter
Pinterest
WhatsApp
Previous articleFlood-like situation due to incessant rains in Maharashtra, talks with PM Modi to CM Uddhav
Next article‘Parliament’ started with farmers at Jantar Mantar in the midst of monsoon session, 200 farmers will join the dharna