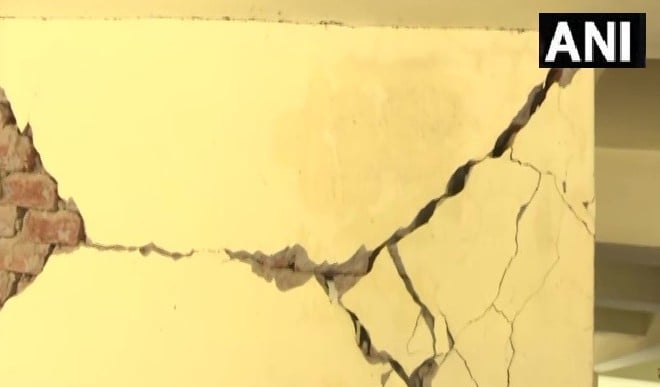 Guwahati / Shillong / Jalpaiguri. In Assam and some other northeastern states, quake tremors were felt seven times a day on Wednesday morning causing severe damage to buildings and people coming out of their homes. Regional Meteorological Center (RMC) Deputy Director Sanjay O’Neil Shaw said that the first earthquake which occurred at 7.51 am recorded a magnitude 6.4 and its epicenter was 43 km west of Tezpur, the district headquarters of Sonitpur district in Assam. Earthquake tremors were also recorded in the entire northeastern region and parts of West Bengal. After this, tremors of earthquakes of magnitude 4.7, 4 and 3.6 were felt at 8.30 am, 13:18, 8:25, eight at 44 minutes.

Assam: This morning’s earthquake caused cracks in the buildings in Guwahati. pic.twitter.com/nm76rT5Nvz

Also read: Corona havoc continues in the country, around 3300 deaths and 3.62 lakh new cases in 24 hours

Subsequently, a tremor of 3.2 magnitude earthquake was felt in Nagaon district of the state at 10.5 am. Shortly thereafter, another tremor of a magnitude 3.4 earthquake was felt at Tezpur at 10.39 am. Prime Minister Narendra Modi spoke to Assam Chief Minister Sarbananda Sonowal and inquired about the damage caused by the earthquake. He tweeted, “Talked to Assam Chief Minister Mr. Sarbananda Sonowalji regarding earthquake in many parts of the state. The Center has assured all possible assistance. I pray for the people of Assam to be well-to-do. ”Home Minister Amit Shah also spoke to Sonowal over phone and assured him that the Center stands firmly with the people of Assam. Congress leader Priyanka Gandhi Vadra said, “My Assam sisters and brothers, who are facing the double whammy of earthquake and second wave of Kovid-19, send you my love and prayers.” Sonowal requested everyone to be cautious And said that he is taking information from all the districts. The tremors were felt across the region including neighboring Arunachal Pradesh, Meghalaya and northern parts of West Bengal. People moved out of their homes, ignoring social distance and other Kovid guidelines amid growing epidemic cases. No casualties have been reported but many people have suffered minor injuries while running out of the house due to nervousness.

Also read: Online registration will be done from Wednesday for vaccination of people above 18 years of age, know important things

There are reports of widespread damage to buildings and other structures in Assam, mainly in the central and western cities of Tezpur, Nagaon, Guwahati, Mangaldoi, Dhekiajuli and Morigaon. Sources said that the building of the Chief Minister’s Block, State Secretariat in the ‘Janata Bhavan’ complex in Guwahati has been damaged. The luxury Taj Vivanta in Guwahati has also suffered significant losses. Hotel spokeswoman Indrani Phukan told PTI-language that several glass windows, ceilings and walls of the hotel fell apart. However, it is a compliment that no employee or visitor was hurt. Health care centers like Dispur Hospital, Apollo Clinic, Down Town Hospital and Excelcare Hospital also suffered losses. A multi-storey building in Nagaon collapsed causing panic among the people. Several houses, apartment buildings and shopping malls in the state also suffered cracks. Many vehicles were also damaged. Dhekiajuli MLA Ashok Singhal has tweeted pictures of cracks in the ground and water coming out of them. However, these have not been confirmed yet. Earthquake tremors in Shillong arose and many people began to move out of their homes out of fear.

There is no report of any damage in Meghalaya, an official said. However, these tremors are one of the most severe tremors in the last few years. He said that the shock of such intensity was last seen in March-April 2016. Officials said tremendous tremors were felt in Arunachal Pradesh as well. The state capital, Itanagar and East Kameng district, have seen cracks in some buildings. Arunachal Pradesh Chief Minister Pema Khandu tweeted, “Earthquake tremors were felt in Assam and Arunachal Pradesh and Northeast this morning. I pray for everyone’s safety. Please ensure the safety of yourself and your loved ones. Thanks to Prime Minister Narendra Modi ji, Home Minister Amit Shah ji and Dr. Jitendra Singh ji for reacting immediately to the situation. “Local officials said that the earthquake in parts of Jalpaiguri, Alipurduar, Cooch Behar and Darjeeling district in West Bengal Tremendous tremors were felt but no major losses were reported.