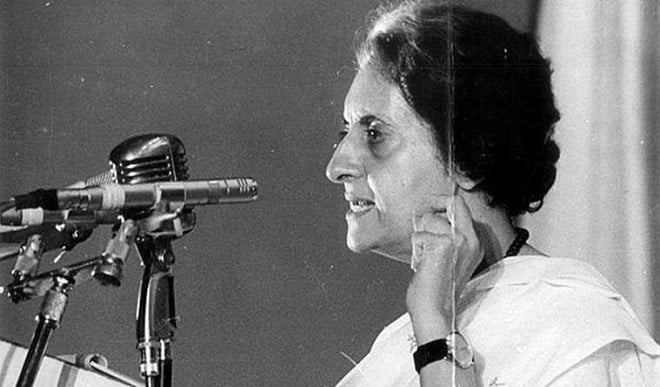 Even though it has been 46 years since the Emergency, the wounds of those who saw the pain of the crimes committed during this period have not healed even today. In the early morning hours of 26 June 1975, the day when Prime Minister Indira Gandhi announced through radio, the President has declared emergency, there is no need to panic.

On the night of June 25, President Fakhruddin Ali Ahmed signed the proclamation of emergency. Soon after, newspapers, presses across Delhi were plunged into darkness as power cuts ensured that nothing could be printed for the next two days. Censorship was imposed on the press during the Emergency. On the other hand, hundreds of political leaders, activists and trade unions opposing the Congress party were jailed in the early hours of 26 June.

The 21-month-long state of emergency in the country was aimed at controlling “internal unrest”, for which constitutional rights were suspended and freedoms of expression and the press were withdrawn. Indira Gandhi justified a drastic measure like Emergency in the context of national interest mainly on three grounds.

He said that India’s security and democracy are in danger due to the movement started by Jayaprakash Narayan. Second, he was of the view that there was a need for rapid economic development and upliftment of the underprivileged. Third, he warned against interference from foreign powers that could destabilize and weaken India.

The months before the declaration of emergency were filled with economic troubles – rising unemployment, extreme inflation and food shortages. Along with the dismal state of the Indian economy, there were widespread riots and protests in many parts of the country. Interestingly, the country’s hitherto narrow borders were quiet in the years before the Emergency.

Now let us tell you that the four reasons on which former Prime Minister Indira Gandhi declared emergency. First of all let’s talk about Navnirman movement in Gujarat.

Gujarat was ruled by Congress under the leadership of Chief Minister Chimanbhai Patel. The government was notorious for its corruption and its head was popularly known as Chiman Chor (thief). In December 1973, during the reign of Chimanbhai Patel, students of LD College of Engineering in Ahmedabad went on strike to protest the hike in school fees. A month later, students of Gujarat University staged a protest demanding the dismissal of the state government. This movement was named ‘Navnirman Andolan’ or Movement for Upliftment.

The protest of the students against the government became even more fierce. Soon factory workers and people from other segments of society joined in. Clashes with police, burning of buses and government offices and attacks on ration shops became a daily occurrence. By February 1974, the central government was forced to act on the protest. It suspended the assembly and President’s rule was imposed in the state. Historian Bipin Chandra wrote in his book ‘India Since Independence’, “The final act of the Gujarat drama was played in March 1975, when Indira Gandhi dissolved the assembly after facing Morarji Desai’s relentless agitation and fast-unto-death. and announced new elections in June.

In March 1974, a student protest erupted in Bihar, in which opposition parties poured their strength. Second, in the case of Bihar, Indira Gandhi did not accept the suspension of the Assembly. However, the JP movement was instrumental in determining him to declare an emergency. He inspired the students to boycott classes and work towards raising the collective consciousness of the society, writes noted writer Ramachandra Guha. A large number of clashes were taking place with the police, courts and offices, schools and colleges.

In June 1974, JP led a large procession through the streets of Patna, culminating in a call for a ‘complete revolution’. He urged the dissidents to pressurize the sitting MLAs to resign, so that the Congress would be able to topple the government. In addition, JP visited large parts of northern India, attracting sections of students, businessmen and intellectuals to his movement. The crushed opposition parties in 1971 saw JP as a popular leader best suited to stand against Gandhi. JP also realized the need for organizational capability of these parties to be able to face Gandhi effectively.

Indira Gandhi denounced the JP movement as being extra-parliamentary and challenged them to face her in the March 1976 general elections. JP also accepted Indira Gandhi’s challenge and formed the National Coordination Committee for this purpose. Soon after this Gandhi imposed emergency.

The Bihar movement was still burning in the fire that by then the fire of another movement had smoldered in the country. There were riots and demonstrations in Bihar that under the leadership of the socialist leader George Fernandes, the railway movement was announced. The country came to a standstill because of this movement. This three-week-long agitation, in May 1974, resulted in a strike that stalled the movement of goods and people. Guha has written in his book that about one lakh railway workers took part in this movement. “There were militant demonstrations in many towns and cities—in many places, the army was called in to maintain the peace,” he writes. Gandhi’s government fell heavily on the protesters. Thousands of employees were arrested and their families forced out of their quarters.

Even now the fire of JP movement and rail movement in the country was not extinguished properly that another problem arose in front of Indira Gandhi. Meanwhile, socialist leader Raj Narayan filed a petition against Indira Gandhi in the Allahabad High Court. Raj Narayan emerged as a threat to Gandhi in the 1971 Rae Bareli parliamentary elections. In the petition, he had accused the former prime minister of winning elections through corrupt practices. It was alleged that he spent more money than allowed and was further campaigned by government officials.

On March 19, 1975, Gandhi became the first Indian prime minister to testify in court. On June 12, 1975, Justice Sinha read out Gandhi’s decision to declare Gandhi’s election to Parliament void in the Allahabad High Court, but was given 20 days to appeal to the Supreme Court.

On June 24, the Supreme Court granted a conditional stay on the High Court order. During this, Indira Gandhi got permission to appear in Parliament but she was not allowed to vote till the court’s decision on her appeal. Court This decision gave impetus to the JP movement, which convinced them of their demand for the Prime Minister’s resignation. Moreover, till now senior members of the Congress party were also of the opinion that his resignation would be favorable to the party. However, Indira Gandhi firmly occupied the prime minister’s post with the belief that she could single-handedly lead the country.

A day after the Supreme Court ruling, an ordinance declaring a state of internal emergency was drafted and the President immediately signed it. In his letter to the President requesting a proclamation of emergency, Gandhi wrote, “Information has reached us which indicates an imminent threat to India’s security.”