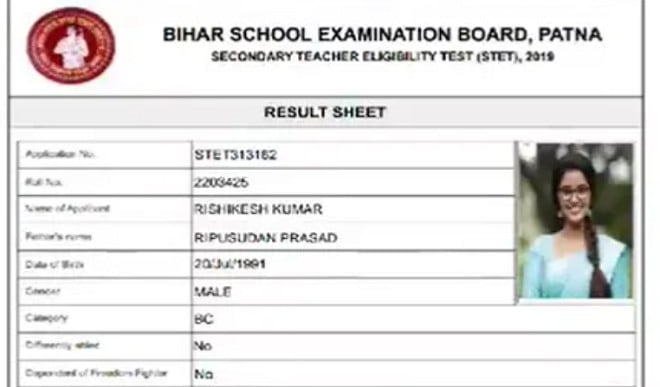 Rishikesh Kumar, a resident of Bihar’s Jehanabad district, has secured 77 percent marks in the Secondary Teacher Eligibility Test (STET), but in the results uploaded on the website of the Bihar School Examination Committee (BSEB), he was replaced by Malayalam film actress Anupama Parameswaran’s picture. is.

Patna. A big negligence of Bihar School Committee has come to the fore. Here, a picture of a Malayalam film actress has been pasted on the result sheet of a student’s teacher eligibility test. Even two years before this, the government had come under fire for the selection of actress Sunny Leone in the recruitment of Junior Engineer. Rishikesh Kumar, a resident of Bihar’s Jehanabad district, has secured 77 percent marks in the Secondary Teacher Eligibility Test (STET), but in the results uploaded on the website of the Bihar School Examination Committee (BSEB), Malayalam film actress Anupama Parameswaran’s picture was pasted in his place. is.

“This is not the first instance,” Rishikesh told reporters disappointedly. His photo was put on my admit card. When I brought this matter to the notice of the authorities they said they will rectify it and I was asked to give my exam with the same admit card but as it is clear from the exam result nothing has been done till now Education Department Principal Secretary Sanjay Kumar said that he is aware of the matter and orders have been given for investigation. “These exams were conducted by BSEB and hence it has been asked to look into the matter and take appropriate action at the earliest,” he said.

Leader of Opposition in Bihar Legislative Assembly Tejashwi Prasad Yadav tweeted on the matter, “After making Sunny Leone top in Bihar’s Junior Engineer exam, now Malayalam actress Anupama Parameswaran has been cleared STET exam.” Attacking him, he alleged, “Nitish ji is wasting the lives of crores of youth by rigging every examination resumption. It takes a decade to complete a restoration (recruitment) that too rigged.” It is noteworthy that in 2019, Sunny Leone’s name was found included in the list of newly selected junior engineers. The department had termed it as a “mischievous” act and said that the list was provisional, adding that the mistake would be rectified till the “final” result is out.

Scam, that too with the future of youth! The government with the scam ‘Officer Raj’ having such low and lousy thinking should die.
People from all over the country used to come to take education in the ancient Nalanda University.
Now famous Malayalam actress has come in the list of getting jobs in Bihar @anupamahere pic.twitter.com/9tD4kzF9vX