RCB vs CSK IPL 2021: Virat Kohli and Dhoni’s team will be face to face, who will beat it? 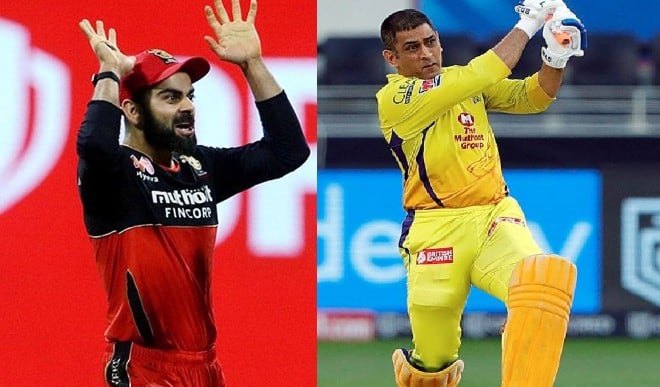 Mumbai. Virat Kohli’s Royal Challengers Bangalore (RCB) and Chennai Super Kings (CSK), led by Mahendra Singh Dhoni, face-to-face in the Indian Premier League (IPL) match here on Sunday, their eyes will not only score two points but the victory campaign continues Will remain on keeping. RCB have won all four of their matches so far and are at the top of the table. CSK, on ​​the other hand, made a good comeback after losing the first match and won three consecutive matches to move up to second place.

RCB defeated Rajasthan Royals by 10 wickets in the last match and are committed to continue their performance. CSK is also buoyed by three consecutive wins and in such a situation the task will not be easy for RCB. Kohli and the talented Devdutt Padikkal did not allow one of the Royals bowlers to walk in the last match and both of them will try to give the team a good start again in the face of a diversified attack by CSK. RCB have started well this season and Kohli understands the importance of maintaining consistency in the long-term league. RCB’s batting relies heavily on Kohli, South African legend AB de Villiers and Australian Glenn Maxwell.

Padikkal’s good form has also benefited the team. However, the RCB batsmen will now face Deepak Chahar, who specializes in getting wickets in the beginning. RCB bowlers have also done well so far. Mohammed Siraj has made an impact but now he is facing CSK who have good batsmen in the lower order as well and losing the wickets in the beginning does not put them under pressure. Ruturaj Gaikwad played an impressive innings against Kolkata Knight Riders after failing in three matches and formed a big partnership for the first wicket with Faf du Plessis. CSK will try to capitalize on the good start. He has batsmen like Moeen Ali and then Suresh Raina at number three. Captain Dhoni has not shown his fire so far but according to coach Stephen Fleming, he is showing better game in every match. In bowling, Chahar has played a very good role for CSK so far, while spinners Ravindra Jadeja and Moin have also contributed well. Shardul Thakur has proved costly on some occasions but he is an important member of CSK’s bowling department.

Share
Facebook
Twitter
Pinterest
WhatsApp
Previous articleIPL 2021: Mumbai’s star batsmen roar after an embarrassing defeat, said – will play such a match, then will not look back
Next articleChidambaram’s allegation, lack of vaccine claims to be hollow