President Kovind, who reached his birthplace, said- Did not even dream that I would get the highest post of the country 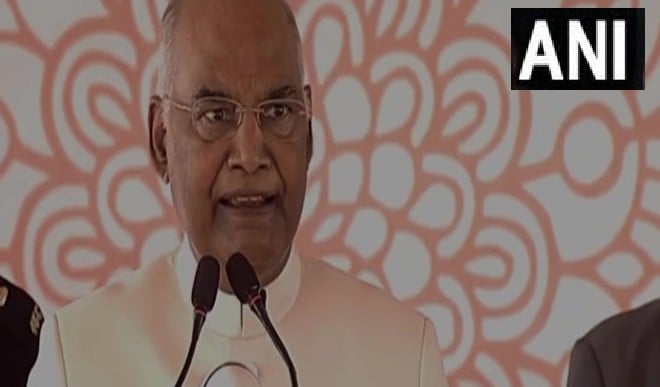 Kovind will also interact with public representatives including his old acquaintances, MLAs and BJP office bearers. He will go to Pukhrayan, where he will meet more than 60 people.

Lucknow / Kanpur Dehat. President Ramnath Kovind Said on Sunday that he never dreamed that he would occupy the highest office of the country. Addressing a gathering in Paraunkh village (his birthplace) in Kanpur Dehat district, Kovind said, “I never dreamed that I would get the honor of holding the highest office in the country, but our democratic system has done so.” The President also paid tribute to the freedom fighters and framers of the Constitution and said, “Wherever I have reached today, the credit goes to the soil of this village, this region and your love and blessings. It is our sacrament to give respect to elders like parents and I am happy that this tradition of giving respect to elders in our family continues even now.

I’d never imagined even in my dreams that an ordinary boy like me from a village would get privilege of discharging responsibilities of the highest office of the country. But our democratic system has made it possible: President Kovind, Jan Abhinandan Samaroh in Kanpur Dehat pic.twitter.com/goQuzkFXLJ

Kovind said, wherever I live, the fragrance of the soil of my village and the memories of the people of my village will always remain in my heart. Paraunkh village is my motherland, from where I have been getting inspiration to serve the country. “This inspiration from the motherland has taken me from the High Court to the Supreme Court, from the Supreme Court to the Rajya Sabha, from the Rajya Sabha to the Raj Bhavan and from Raj Bhavan to Rashtrapati Bhavan,” the President said at his birth place in Paraunkh village on Sunday morning. Arrived where Uttar Pradesh Governor Anandiben Patel and Chief Minister Yogi Adityanath welcomed him. Vikas Rai, Public Relations Officer of the Superintendent of Police said that Patel and Adityanath welcomed Kovind to his native village Paraunkh. Kovind accompanied by his wife and daughter went to Pathri Devi temple, where he offered prayers. He visited Paraunkh village along with the Governor and Chief Minister of Uttar Pradesh. Kovind reached the primary school in Paraunkh village, where he addressed the people.

Kovind will also interact with public representatives including his old acquaintances, MLAs and BJP office bearers. He will go to Pukhrayan, where he will meet more than 60 people. The President will be in Lucknow on 28 and 29 June. According to the President’s program, he will leave for Lucknow on Monday by a special train from Kanpur at 10.20 am and will reach Lucknow railway station at 11.50 am. From the railway station, he will come directly to Raj Bhavan, where he will have lunch. A program will be organized at Raj Bhavan itself at 6 pm, in which the Chief Justice of Allahabad High Court and other dignitaries will attend. Kovind will rest at Raj Bhavan on Monday night. He will lay the foundation stone of Bharat Ratna Dr. Bhimrao Ambedkar Memorial and Cultural Center from Lok Bhavan at 11.30 am on Tuesday. Thereafter, he will leave for Delhi from Lucknow airport at 6.30 pm.