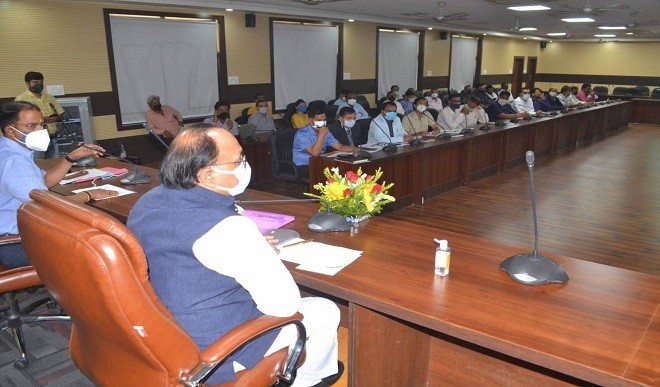 Minister Siddharth Nath Singh said that the government is ready for all possible help for industrial development. Ease of Doing Business is being created. Last 3 days ago, Chief Minister Yogi Adityanath had disbursed loans worth more than Rs 2500 crore to the MSME units of the state. Industrial units were not allowed to be closed in the second wave of Corona.

Secretary Basic Education Council, Shri SP Baghel informed that in the 69000 Assistant Teacher Recruitment process, in the past, the process of provisional selection/appointment of 67867 candidates was done. According to the instructions given by the Hon’ble Chief Minister, 6696 posts fell vacant due to reasons like absence, discrepancies in records, not taking charge and etc., including 1133 vacant posts from the Scheduled Tribes, but reservation and reservation through software developed by NIC. Following the relevant rules of special reservation, the provisional selection list / district allotment list on the basis of district wise preference of the candidates and district wise / category wise vacancies has been published on the website of Basic Education Department. Baghel said that the candidates included in the provisional district allotment list have to appear in the District Basic Education Officer’s office at 10 am on 28th and 29th June, 2021 with all the records and appointment letter for the examination of the records in the allotted district. The date of issue will be intimated separately. He informed that 1133 vacant posts of Scheduled Tribes have been filled by the candidates belonging to the Scheduled Castes as per the instructions. In the vacant 6696 posts, there are 2257 general category candidates against 2833 vacant posts of unreserved category, 2147 other backward class candidates against 1571 vacant posts of other backward classes, in which 576 candidates are included in unreserved category. Secretary Basic Education Council informed that 1128 vacancies of Scheduled Castes and 1164 vacancies of Scheduled Tribes, a total of 2292 posts of Scheduled Caste candidates have been selected. He said that against 6696 vacant posts, 2425 female candidates and 13 Shikshamitras and 1208 disabled candidates are included in the provisional selection / district allotment list.

Uttar Pradesh’s Minister for Micro, Small and Medium Enterprises, Investment and Export, Khadi and Village Industries, Silk, Handloom, Textile Industry and NRI, Siddharth Nath Singh held a meeting with the officials of industrial associations in the Circuit House auditorium on Saturday and discussed about industrial development. discussed for hours. In the meeting, RK Chaudhary National Vice President IIM, Rajesh Bhatia President SIA, Rajesh Singh President Laghu Udyog Bharti Kashi Province, Dev Bhattacharya Ramnagar Industrial Association, Jitendra Narayan Singh President, Piyush Agarwal General Secretary Industrial Association Association Chandpur Maheshpur, Manoj Madheshia Agropark Industries Welfare Society etc. Officials participated and put their points on industrial development. Minister Siddharth Nath Singh said that the government is ready for all possible help for industrial development. Ease of Doing Business is being created. Last 3 days ago, Chief Minister Yogi Adityanath had disbursed loans worth more than Rs 2500 crore to the MSME units of the state. Industrial units were not allowed to be closed in the second wave of Corona. Raw materials also continued to be transported. The government is continuously supplying electricity to the industries with good voltage. He stressed on developing solar parks in industrial areas. Small units and weavers etc. were also suggested to work by installing small solar plants. On the suggestion of setting up a joint ETP plant and export promotion park for pollution control, the Joint Commissioner directed the industry to work out the availability of land and other possibilities on it. Minister Siddharth Nath Singh said that small entrepreneurs making toys should be upgraded with technology according to the demand of today. For this, make a project of Common Facility Center. The minister directed RM UP SIDA to maintain proper road and lighting system in the industrial area. The road, drain for which funds are available, should be completed immediately. Entrepreneurs should not face any kind of problem. Entrepreneur representatives asked the concerned departments to take action on adjusting electricity duty exemption, simplification in bank finance, simplification in labor laws, reducing home tax applicable to industries, reducing maintenance charge by UP SIDA, etc. The minister said that he should continue to propose to free hold the plots of MSME department. On which the entrepreneurs praised freely. Minister Siddharth Nath Singh informed that the state government is working on various self-employment projects like Mukhyamantri Yuva Swarozgar Yojana, free tool kit distribution under Vishwakarma Shram Samman Yojana, training in ODOP, technical up-gradation of youth, cluster development scheme, special training scheme for Scheduled Castes etc. Through the medium, it is providing a large number of employment opportunities. In the above mentioned schemes in Varanasi division, there was more achievement than the target in the last year 2020-21. This year, the projects of the beneficiaries were prepared and sent to the banks, which have started getting approved. There is a lot of potential for setting up MSME units in Uttar Pradesh. In the meeting, Joint Commissioner Industries Umesh Singh, Deputy Commissioner Industries along with officers of the Industries Department of the Board were prominently present.

Uttar Pradesh Deputy Chief Minister Keshav Prasad Maurya paid tribute to the pillar of social revolution and the father of reservation, the leader of social justice, the great social reformer Chhatrapati Shahuji Maharaj on his birth anniversary today by garlanding his portrait at his camp office 7-Kalidas Marg. Keshav Prasad Maurya, while bowing to Chhatrapati Shahuji Maharaj on his birth anniversary, said that he spent his entire life in the form of social service. He brought welfare schemes for the upliftment of the downtrodden, class. He made significant contribution in ending Devadasi system, Sati system, bonded labor system. He was the father of social justice and social democracy. He was the leader of egalitarian society. He was the Messiah of the exploited. He was a believer in democratic values. Maurya said that his whole life is the message. It inspires all of us to walk on the path of social justice. His philosophy of life inspires all of us. We should not only take inspiration from Chhatrapati Sahuji’s philosophy of life, but should also assimilate it and take inspiration from his life and help the downtrodden, downtrodden, exploited, downtrodden and helpless people and social evils. You should play your part in removing it.

In the current financial year 2020-21, in the special circumstances arising in view of the current Kovid-19, the remaining amount of the second installment of the central share under Pradhan Mantri Awas Yojana-Gramin was Rs 54845.156 lakh (Rupees five billion forty eight crore forty five) from the point of view of cash management. Lakh fifteen thousand six hundred only) has been approved. In this regard, necessary order has been issued by the Rural Development Department, in which it is mentioned that while releasing the grant to the beneficiaries, it will be ensured by the Commissioner, Rural Development that the beneficiary is not given any other scheme for the work in question. . Necessary guidelines have been given to the Commissioner, Rural Development Department, Uttar Pradesh for further action in this regard.

An amount of Rs.017 crore 92 lakh 41 thousand has been allocated from State Road Fund for 4 routes of Meerut district.

According to the instructions of the Deputy Chief Minister of Uttar Pradesh Keshav Prasad Maurya, the Uttar Pradesh Government has approved the administrative and financial sanction of Rs.61 crore 71 lakh 85 thousand for the works of 4 roads of Meerut district from the State Road Fund in the current financial year with Rs.17 crore92 from the State Road Fund. Approval has been given to release an amount of Rs. Necessary mandate in this regard has been issued by the Government of Uttar Pradesh, Public Works Department. In these four works, the work of widening and strengthening of Hastinapur to Saifpur Karamchandpur road in district Meerut, construction and strengthening of Mawana Jaisingpur-Mirzapur road to Mata Bhadrakali temple, widening and strengthening of Mawana Jaisinghpur-Mirzapur road and Nayagaon Makhdumpur road will be done. Deputy Chief Minister Keshav Prasad Maurya has directed the concerned officers to get the works executed as per the prescribed and approved standards and specifications so that high quality can be ensured.

Also read: BJP’s election innings… Preparation for Mission 2022, there will be a competition in these states, what can be the next picture?

Share
Facebook
Twitter
Pinterest
WhatsApp
Previous articleYogi Adityanath’s government in Uttar Pradesh, no one will be able to play here: Siddharth Nath Singh
Next articleKarnataka government implemented weekend curfew in the state, know what will be open, what will remain closed