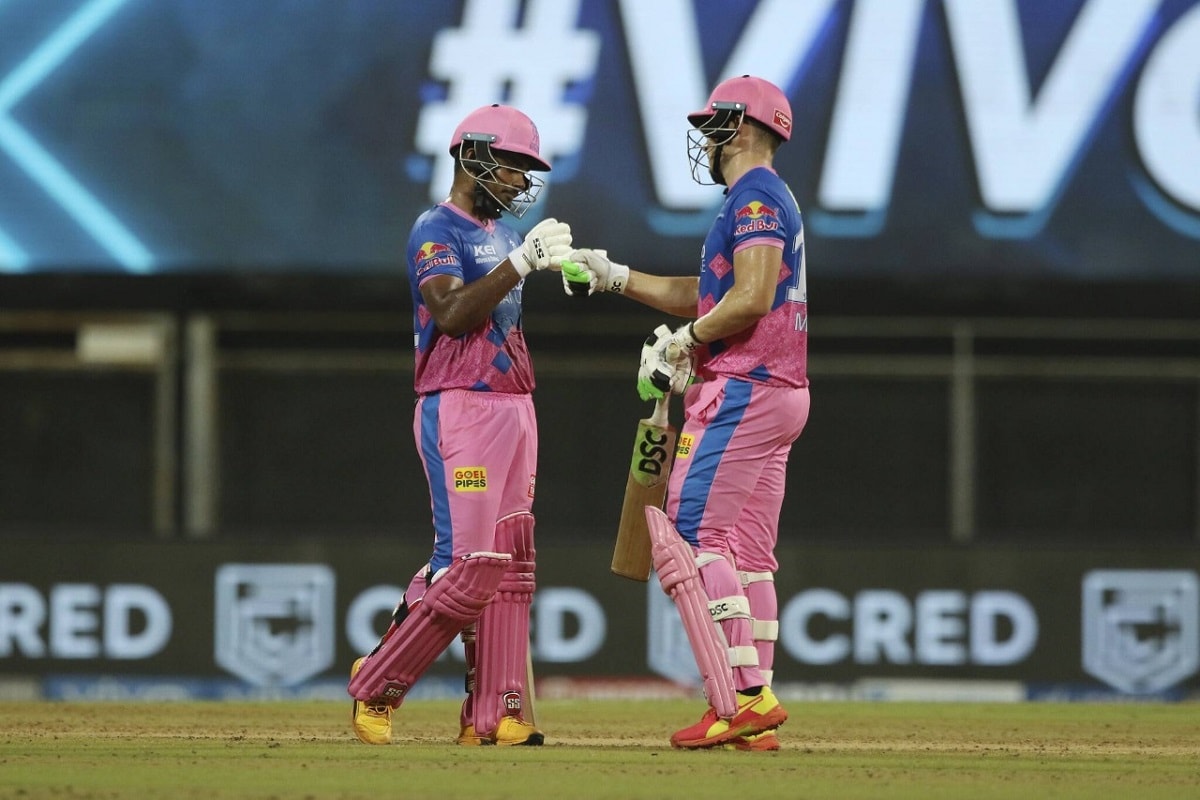 Sanju Samson and David Miller during the innings (Photo: pti)

IPL 2021 RR vs KKR Highlights: With this win, Rajasthan team reached the sixth place in the table with four points, while KKR reached eighth place with two points after their fourth consecutive defeat.

Mumbai. After a brilliant performance by the bowlers led by Chris Morris (four wickets for 23 runs), the unbeaten 42-run stand by skipper Sanju Samson gave Rajasthan Royals six wickets in the 18th match of the IPL to Kolkata Knight Riders (KKR) Recorded the second win of the season. Rajasthan’s team dominated from the beginning of the match in this match of two teams, which occupies the bottom position in the table. He reached the target after losing four wickets in 18.5 overs after stopping KKR’s innings for 133 runs for nine wickets.

With this win, Rajasthan team reached the sixth place in the table with four points, while KKR reached eighth place with two points after their fourth consecutive defeat. Samson hit two fours and a six in his 41-ball unbeaten innings. He was well supported by David Miller, who scored 24 runs in 23-ball unbeaten innings with the help of three fours. Yashasvi Jaiswal and Shivam Dubey contributed 22-22 runs. Earlier, Man of the Match Chris Morris took four wickets for 23 runs in four overs, while Jaydev Undakat, Chetan Sakaria and Mustafizur Rahman got one each.

Rahul Tripathi contributed the highest 36 runs for KKR. He hit two sixes and a four in a 26-ball innings.

Rajasthan opener Jaiswal, who came out to chase the target, got a life in the first over. His catch was dropped by Shubman Gill off Shivam Mavi. Jaiswal hit two consecutive fours in the next over against Pat Cummins.

On the fifth ball of the same over, Cummins’ bouncer collided with the helmet of Jos Buttler (05). Cummins immediately approached Butler to know his well-being, after which the physio of Rajasthan also came on the field and after his sighting, Butler continued to bat.

KKR captain Morgan handed the ball to Varun Chakraborty in the fourth over and the spinner trapped Butler on the second ball after hitting the first ball.

Mavi drove Jaiswal in the fifth over of the innings. He scored 22 runs in 17 balls. Shivam Dubey then hit a six against Sunil Narayan, which made Rajasthan score 50 for two after the power play. Dubey hit a four in the 11th over against Chakraborty but after one ball, the famous Krishna was caught.

Gill donated life to Rahul Teotia off the ball of Chakraborty in the 13th over. Tewatia, however, failed to take advantage of this and in the next over was caught by the established player Kamlesh Nagerkoti in a round of big shot off the famous Krishna ball.

Miller then hit a four in the 16th over off the famous Krishna but Narayan missed an easy chance to run out to Samson. Samson gave Rajasthan the victory by taking a run on the fifth Gayd of the 19th over.

After getting the batting invitation earlier, apart from Tripathi, none of the KKR batsmen could play comfortably. After being economical for the first two overs, Nitish Rana hit the first four of the innings off Jaydev Unadkat in the third over, while Gill drove Mustafizur to the boundary in the next over. After two balls of this, Jaiswal dripped Gill’s catch.

Gill, however, failed to take advantage of this and was run out in an attempt to steal a run in the sixth over. Butler’s direct throw ended his 19-ball 11-run innings. In the power play, KKR could only score 25 runs on one wicket.

Sakaria, who came for bowling in the ninth over, made Rana walk after getting caught by wicketkeeper Samson. He scored 22 runs in 25 balls. After this, Narayan, who came to bat, hit a four on his first ball.

Unadkat, however, showed the path to the pavilion before it became dangerous to Narayan. Narayan failed to read his slow ball and Jaiswal took a brilliant catch and finished his six-ball innings. KKR scored 53 runs in 10 overs with three wickets.

Tripathi welcomed Morris’ second spell in the 11th over with a six over the fine leg. Captain Oyen Morgan was run out unfortunate on the next ball without coming on strike. Tripathi hit a fine straight drive but the ball hit Morgan’s bat and went to Morris and he did not delay to scatter the gills.

Mustafizur then trapped Tripathi in the 16th over with a slow ball. He was caught catching Ryan Pollen in the circle of making a big shot.

Andre Russell (nine runs off seven balls) opened his hand against Morris with a six in the 17th over, but two balls later he was caught by David Miller at long on boundary. In the same over, Sakaria took a brilliant catch off Karthik to end his 25-run knock off 24 balls.

Cummins (10) hit a six against Morris on the first ball of the 20th over, but was caught by Parag on the next ball. Morris scored the fourth success by bowling Shivam Mavi (05) on the last ball of the innings.