Imran Khan said – Pakistan wants equal relations with America, as it is of India 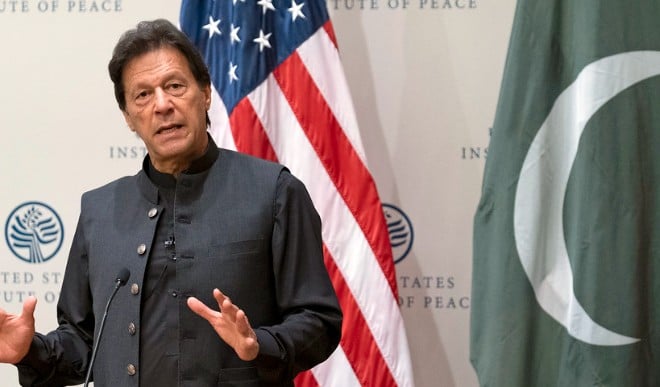 Pakistan Prime Minister Imran Khan said that he wants a ‘civilised’ and ‘equal’ relationship with the US. Khan made this remark during an interview to the American newspaper ‘The New York Times’. He also expressed disappointment in the interview that there has been no progress on his efforts to normalize relations with India.

Islamabad. America After leaving war-torn Afghanistan, there and in the region Pakistan Underlining the role it can play, Prime Minister Imran Khan on Saturday said Pakistan wants “civilised” and “equal” relations with Washington like the US has with Britain or India. Khan made the remarks during an interview to American newspaper ‘The New York Times’. He also expressed disappointment in the interview that his efforts to normalize relations with India had made no progress even though he had contacted Prime Minister Narendra Modi shortly after taking office in August 2018.

Also read: Derek Chauvin sentenced to 22 years and six months in prison for the murder of George Floyd

The interview comes as US President Joe Biden held his first one-on-one meeting with his Afghan counterpart Ashraf Ghani at the White House on Friday, The Dawn newspaper reported. Khan said it had closer ties with the US than with other countries like India in the region and was America’s partner in the war against terrorism. “Now, with the US leaving Afghanistan, Pakistan basically wants a decent relationship like you have with other countries and we would like to improve our business relationship with the US,” he said. Asked to elaborate on his vision of civilized relations, Khan said he wants a relationship “like the one between the US and the UK or the US and India now”. Therefore, a relationship that is equal.”

“Unfortunately, during the fight against terrorism, relations were a bit unbalanced,” he said. He said, “It was an imbalanced relationship because America thought it was giving aid to Pakistan. He felt that Pakistan would have to obey America in such a situation. And Pakistan had to pay a heavy price for trying to obey the US… 70,000 Pakistanis were killed, and over $150 billion in damage to the economy because of suicide attacks and bombs going off all over the country. Khan said the main problem with this unbalanced relationship was that the “Pakistani government tried to do what it was not capable of” and this led to “trust between the two countries”. “And people in Pakistan feel that they paid a very, very heavy price for this relationship. And America thinks Pakistan didn’t do enough.”

In the interview, Khan also claimed that Pakistan would have had better relations with them if there was another government in India and they would have resolved all their differences through dialogue. “When I took over, I put forward the vision of (building) a normal, decent business relationship to Prime Minister Narendra Modi… We tried but things didn’t move forward,” he said. Khan claimed, “Had there been another Indian leadership there, I think we would have had a good relationship with them. And yes, we would have resolved all our differences through dialogue.” Relations between the two countries worsened after India in August 2019 withdrew the special status granted to Jammu and Kashmir and bifurcated the state into two union territories. On the status quo in Kashmir, Khan said, “I think it is a disaster for India because it will mean that this dispute will continue … and relations between India and Pakistan – normal relations – will be (hindered).” India has conveyed to Pakistan that it wants normal relations with its neighbours, free from terrorism, enmity and violence. Khan said that America’s perception that India would be a security cover against China was wrong. “I think it will be harmful for India because India’s trade with China will be beneficial for both the countries,” he said. He said that Pakistan is “looking at the unfolding scenario with some concern.