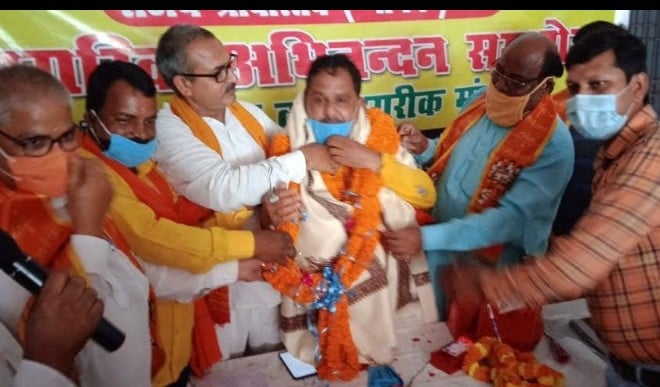 Hansupur ward became the first corona-free ward where no citizen died due to a single covid. The program president of the forum, Pandit Dukhharan Pathak, said that due to the activism of councilor Sanjay Srivastava, there is no major problem in this ward. There is no complaint in road, electricity, water, sanitation at all.

Gorakhpur. Sanjay Srivastava, the popular councilor of Hansupur ward, on a war footing during the Corona period, provided door-to-door sanitization, cleaning, 100 daily Kovid tests and Kovid medicine, due to which Hasupur ward has become the first corona free ward of Gorakhpur. tell that In Hasupur ward, not a single death has been reported from Kovid and very few positive cases have been reported.

Due to this hard work and dedication of Councilor Sanjay Srivastava ji, the lives of the citizens of the ward were saved, due to which the citizens of Hasupur ward came on one platform and today people have felicitated and felicitated their councillor. First of all, President Dukhharan Pathak ji, business leader nominated councilor Madan Agrahari, and all the citizens were greeted by wearing a big garland, presented a shawl and welcomed all the citizens by wearing garlands from the shift, a large number of citizens also presented gifts. Pt Dukhharan Pathak, program president of the forum, said that there is no major problem in this ward due to the activeness of councilor Sanjay Srivastava. There is no complaint in road, electricity, water, sanitation at all.

Also read: President Kovind, who reached his birthplace, said – did not even dream that I would get the highest post of the country

The program was conducted by Girijesh Verma. Addressing the gathering, Councilor Sanjay Srivastava said that “the citizen of our ward is in the form of a member of our family. If the citizen of his ward has any complaint, we will immediately solve it. I do all the work that was necessary for the general public in the corona protocol, due to which our ward became the first corona free ward and no death occurred. In the program Kripa Shaker Tripathi, Advocate, Laxmikant Singh, Abhishek Agarwal, Madan Agrahari, Prem Kushwaha, Shashikant Shukla, Mohan Shukla, Rahul Kannojia, Amit, Shobhi, Devraj, Rajesh Srivastava, Girish Chand told about the councilor in turn. , Vinod, Ajay Sahni, Seema Maheshwari, Aradhana Gupta, Padma Gupta, Vinod Vaish, including hundreds of citizens attended.