DM forced marriage to stop! The bride and groom were beaten up, abused and beaten the sticks with sticks 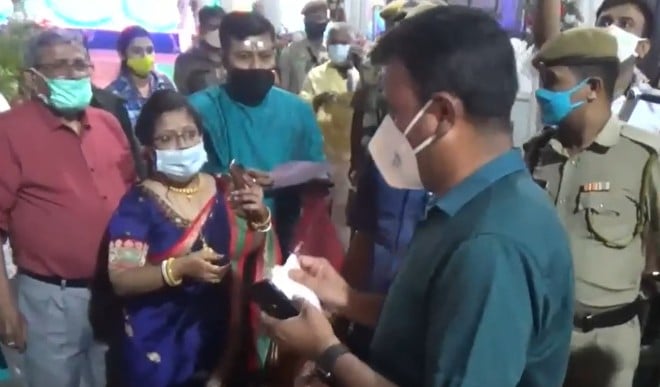 Shailesh Kumar Yadav was quoted as saying, “I apologize if any person or group is suffering from last night’s action. But what was done last night was done only for the benefit and well being of the people. My The purpose was not to torment or humiliate anyone.

After the video of DM Shailesh Kumar Yadav’s action at the wedding ceremony, Tripura Chief Minister Biplab Kumar Deb has asked the Chief Secretary to report the incident. Seeing the seriousness of the matter, the Chief Minister has suspended the District Magistrate with immediate effect.

In the video footage that went viral on social media, Shailesh Kumar Yadav is shooing the people who got married very badly. You will see in the video, the bride was also forcibly removed from the stage by the police. Other people who were at the wedding venues were also ordered by the policemen to evacuate the place. The DM also nicked sticks at the wedding, including relatives and family members. How much do you consider behavior in a marriage like this?

Now, five MLAs – Ashish Kumar Saha, Diba Chandra Hangalwal, Ram Prasad Paul, Sushant Choudhary, and Ashish Das – have written a letter to Chief Secretary Manoj Kumar, demanding immediate action against Shailesh Kumar Yadav. The MLAs, in their letter titled ‘Height of State Terrorism and Disgusting Abuse of DM’, alleged that Shailesh Kumar Yadav not only “physically attacked” the bride and groom at the wedding venue, but also “out” the priest. pushed. And “abused” the attendees.

He openly abused police personnel, scrambled in police uniforms and announced to suspend the office in-charge of West Agartala police station … even the women on the spot were not spared the abuse.

The third wave of Corona will also come in India, warning to the Principal Scientific Advisor of the Government, Vijay Raghavan