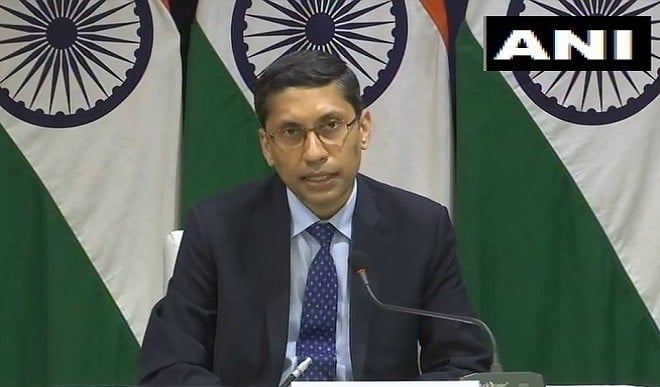 New Delhi. India on Thursday alleged that China’s mobilization of troops in the border areas of eastern Ladakh last year and unilateral attempts to change the status quo along the Line of Actual Control (LAC) were responsible for the ongoing military standoff in the region. And these steps are also in violation of the India-China bilateral agreement. Foreign Ministry spokesman Arindam Bagchi gave this response when asked about the statement of the Chinese Foreign Ministry that China’s military deployment in the border area is to prevent India’s encroachment or threat and China’s military deployment in this area Common defensive system. “It is well known that last year’s Chinese action (in the western sector) seriously affected the peace in the border areas,” a foreign ministry spokesperson said.

He said that unilateral attempts to change the status quo along the Line of Actual Control (LAC) resulted in breach of peace by the gathering of troops in large numbers in the border areas. This has caused serious damage to peace and harmony in the border area. Bagchi said last year’s Chinese action was in violation of bilateral agreements, including the 1993 and 1996 agreements, that require both sides to respect the LAC and maintain a minimum number of troops. Significantly, during an online address at the Qatar Economic Forum, External Affairs Minister S Jaishankar had said on Tuesday that the big issue in the matter related to the border dispute in eastern Ladakh is whether India and China can build a relationship based on mutual sensitivity and respect and Will Beijing stick to a written commitment that includes not deploying large numbers of armed forces along the border by both sides? Jaishankar had also made it clear that there is no correlation between India becoming part of the Quad and the border dispute with China. The External Affairs Minister had said, the India-China border dispute predates the existence of the Quad. In many ways this is a challenge and a problem that is completely different from the Quad. Of course, at the moment there are two big issues, one of which is the issue of deployment of troops, especially in Ladakh. After this, China said on Wednesday that the pending border issue with India should be resolved through peaceful talks and should not be linked to bilateral relations. Chinese Foreign Ministry spokesman Zhao Lijian had said that China’s military deployment in the western sector of the border is a normal defensive arrangement. This is to prevent encroachment or threat against the territory of China by the country concerned. In response to another question, Ministry of External Affairs Spokesperson Bagchi said that there is no latest information regarding the next meeting of the Consultative and Coordination Working Mechanism (WMCC) on Border Affairs regarding the East Ladakh standoff. It is noteworthy that there is a military standoff between India and China on the border in eastern Ladakh since the beginning of May last year. However, the two sides completed the process of withdrawing troops from the northern and southern banks of Pangong Lake in February after several rounds of military and diplomatic talks. It is understood that in some areas the deadlock over the withdrawal of troops is still going on. Last month, Army Chief General MM Naravane had said that the situation in eastern Ladakh cannot return to normal without a complete withdrawal from all areas of conflict and the Indian Army is prepared for all situations in the region.