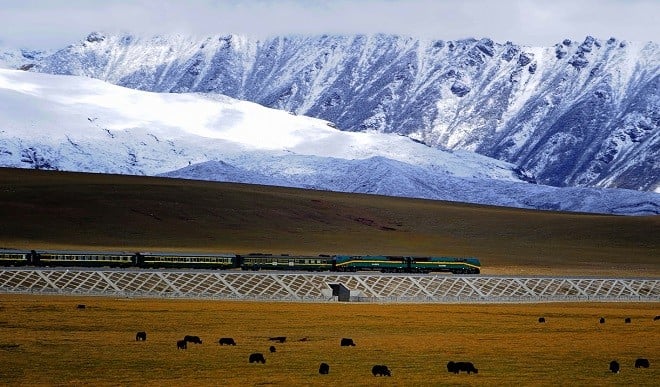 The first electric-powered railway in the Tibet Autonomous Region began on Friday morning from Lhasa to Nyangchi where “Fuxing” bullet trains began official operations in the plateau region. The Sichuan–Tibet Railway will be the second railway in Tibet after the Qinghai–Tibet Railway.

China occupied Tibet in the 1950s and since then Tibet’s independence has bowed to Chinese dictatorship. The same Tibet has become China’s strategic strategic goal post against India. China started operating its first electronic bullet train in the strategically important Tibetan region of the Himalayas. This train will connect Nyingchi with Lhasa, the capital of Tibet. The centenary celebrations of the Communist Party of China are on July 1 and just before that bullet train has been started on the rail route of more than 435 km. This is China’s first electric project in Tibet. 9 stations have been built in the way of the bullet train at a speed of 160 kmph. Along with carrying passenger passengers, this bullet train will also serve as Fred Transportation.

Also read: Defense Minister Rajnath Singh will visit LAC, will increase the might of the army

The first electric-powered railway in the Tibet Autonomous Region began on Friday morning, from Lhasa to Niyangchi where “Fuxing” bullet trains began official operations in the plateau region, state-run Xinhua news agency reported. The Sichuan–Tibet Railway will be the second railway in Tibet after the Qinghai–Tibet Railway. It will pass through the southeast region of the Qinghai-Tibet Plateau, one of the most geologically active regions in the world.

Also read: Chinese attempt to save it from action failed, Pakistan was gray…will remain gray

This project is strategically important for China

Neangchi is very close to the Arunachal border of India. China has run the bullet train reaching Nichei Railway Station, 2950 meters above sea level, only because of strategic importance. The experts themselves believe this thing. China claims Arunachal as part of South Tibet. This region, falling on the LAC of more than 3400 km, poses a major strategic challenge to India. In November 2020, when Chinese President Xi Jinping issued an order for the early completion of the Lhasa Nyingchi Rail Project. Then he clearly said that this rail line is for stability on the border.