BJP’s election innings…Mission 2022 preparations, these states will see a competition, what can be the next picture? 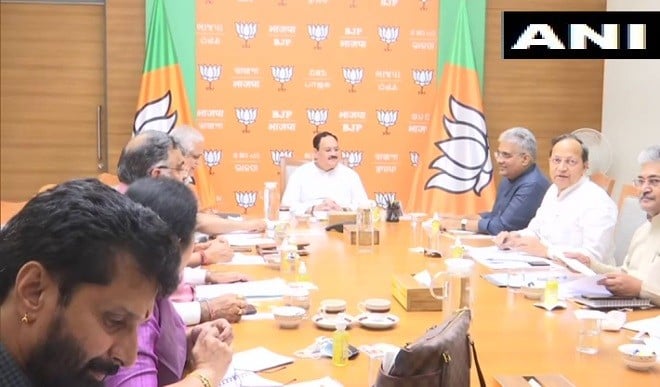 A big election meeting was held at the BJP headquarters in Delhi today. In the meeting, with the assembly elections to be held in five states, the possible plans of the government to increase the party’s base and Corona were brainstormed. It is believed that all the ministries will announce new schemes very soon.

Before the elections in five states, the round of meetings is going on in the BJP. After several meetings from UP to Delhi, there were some reshuffles in the organization of UP. New faces were inducted and today again a big election meeting was held at the BJP Headquarters in Delhi. Apart from BJP President JP Nadda and Organization General Secretary BL Santosh, Home Minister Amit Shah and Defense Minister Rajnath Singh also attended this meeting.In the meeting, with the assembly elections to be held in five states, the possible plans of the government to increase the party’s base and Corona were brainstormed. It is believed that all the ministries will announce new schemes very soon. Which is being prepared for landing on the ground.

Which states have elections next year?

In the states where elections are to be held next year, most of the places are currently occupied by the BJP. In such a situation, there will be a challenge before the BJP to retain its power in these states, while an opportunity to present itself as an alternative in front of the opposition. While there are BJP governments in Uttar Pradesh, Uttarakhand, Goa and Manipur, there is a Congress government in Punjab.

where how many voters

Uttar Pradesh: Elections are likely to be held in Uttar Pradesh in February-March next year. It is said about this state that the ladder of power of the country passes through Uttar Pradesh. Uttar Pradesh has 80 Lok Sabha seats. Since 2014, BJP has transformed Uttar Pradesh into Modi state. After winning 71 seats in the 2014 elections, it had registered a record-breaking victory in 2017 with 312 seats. After Chief Minister Yogi Adityanath’s meetings with Prime Minister Narendra Modi and Home Minister Amit Shah in Delhi, there was constant speculation about Uttar Pradesh. At the same time, the news of BSP joining hands with Asaduddin Owaisi is in the news.

Punjab: In the Congress-ruled state of Punjab, a phase of head-football is going on within the Congress and the captain of the state has to make frequent appearances in the Delhi Durbar. In the 2017 elections, the Congress came to power with 77 seats, while the Aam Aadmi Party, which was contesting for the first time in the state, came second. The BJP and Akali alliance had won only 15 seats. However, Akali’s alliance with BJP has broken over agricultural laws and this time Akali Dal is in the electoral fray by joining hands with BSP.

Goa: Goa, a state with 1.45 lakh voters, is also going to go to polls next year. At present, the Bharatiya Janata Party government is in Goa with 40 assembly seats.

Manipur: Assembly elections are also to be held in Manipur in the year 2022. At present, the BJP is in power in Manipur with 60 assembly seats.

Uttarakhand: Here too elections are to be held in 2022, where the Congress is going to throw full force with the desire to return to power in the state, while the BJP has also geared up from now on. In recent days, BJP has removed Trivendra Singh Rawat from the post of Chief Minister and appointed Tirath Singh Rawat in his place. In such a situation, it will be interesting to see whether Tirath Singh will be able to retain the power of BJP.

Share
Facebook
Twitter
Pinterest
WhatsApp
Previous articleThe bridegroom could not read the newspaper without glasses, the bride returned the procession
Next articleHow effective is the Kovid vaccine on Delta and Delta Plus variants of Corona?