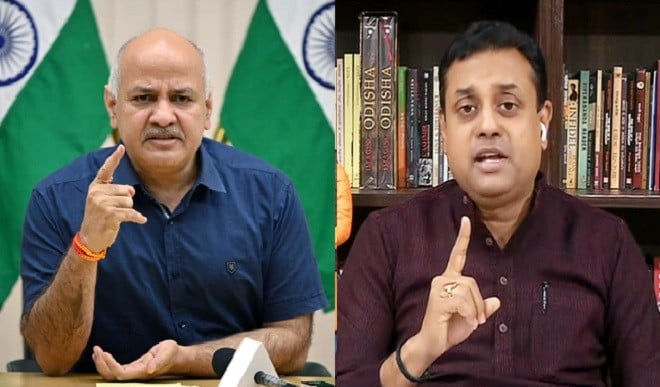 Referring to the report of a committee set up by the Supreme Court to audit oxygen in Delhi, BJP spokesperson Sambit Patra said the chief minister had not only committed a “heinous crime” by telling “four fold lies” but also a “heinous crime”. of ‘criminal negligence’.

New Delhi. The BJP on Friday alleged that Chief Minister Arvind Kejriwal had demanded four times the oxygen requirement in the capital Delhi during the second wave of the coronavirus pandemic and his “lies” had saved lives in at least 12 states. Oxygen supply was disrupted and many people lost their lives. Referring to the report of a committee set up by the Supreme Court to audit oxygen in Delhi, BJP spokesperson Sambit Patra said the chief minister had not only committed a “heinous crime” by telling “four fold lies” but also a “heinous crime”. of ‘criminal negligence’. Delhi Deputy Chief Minister Manish Sisodia rubbished the BJP’s allegations saying there was no such report. He also countered that the alleged report was prepared at the BJP headquarters. Patra, citing reports, said that during the second wave when the cases of infection were at its peak, the Delhi government had demanded 1,140 metric tonnes of oxygen while it could not even use 209 metric tonnes. He said that according to the Delhi government’s formula also, it needed 351 metric tonnes of oxygen, while according to the central government’s estimate, the requirement was 209 metric tonnes and the Kejriwal government had expressed the requirement of 1,140 metric tonnes of oxygen. He said, “Imagine what kind of crime has been committed. This is Arvind Kejriwal’s heinous crime. This is criminal negligence as stated by the committee that they demanded four times more oxygen.

This report has exposed the politics of blaming others for failure in management of COVID-19.” He said, “Due to this lie, the supply of oxygen to 12 states was affected as oxygen supply was low from all over the place. Tax had to be sent to Delhi.” Patra alleged that due to the mismanagement of the Delhi government, oxygen tankers were standing on the road in the capital Delhi when people needed it the most. “If this oxygen had been used in other states, many lives could have been saved. This is a heinous crime committed by Arvind Kejriwal.” The BJP spokesperson hoped that the Chief Minister will be held responsible in the Supreme Court and he will be punished for the crime he has committed. He said, “For the first time in the politics of India, the Chief Minister of Delhi is proving false four times. It’s not a small thing.

Arvind Kejriwal will have to answer to the public.” Patra said that on the same day on May 3, there were almost identical infection cases in Mumbai and Delhi, but Mumbai demanded 275 metric tonnes of oxygen, while Delhi demanded 900 metric tonnes. Had it. Targeting the Aam Aadmi Party government of Delhi, the BJP leader alleged that the Kejriwal government is working on the formula of 100 percent advertising and zero percent Kovid management. Patra claimed that to hide his failure and blame the central government, Kejriwal lied about oxygen. Similarly, Kejriwal is playing politics over the plan to deliver anti-Covid-19 vaccines and door-to-door ration, he said. He claimed that there is no shortage of vaccines in the capital. “A person who can tell such a big lie for oxygen, how much can he lie for ration?”

Also read: In the oxygen supply case, Kejriwal said heinous crime, many lives could have been saved

Patra also blamed the Kejriwal government for the death of people in the capital’s Jaipur Golden Hospital and Batra Hospital due to lack of oxygen. Union Minister Prakash Javadekar tweeted, “The demand for oxygen was four times more than what it was and the rest of the states had to bear the loss, they fell short. In fact, the committee headed by Randeep Guleria, Director of the All India Institute of Medical Sciences (AIIMS), said that during the second wave of infection, the Delhi government on April 30 demanded the allocation of 700 metric tonnes of oxygen. which was based on the “wrong formula”. Responding to the allegations, Chief Minister Arvind Kejriwal said that his “crime” was only that “he fought to give breath to two crore people”. Kejriwal also said that those who have lost their loved ones due to lack of oxygen cannot be called “liar”. Taking a jibe at Kejriwal, BJP leader and in-charge of the party’s media department Anil Baluni said that the Chief Minister created a stir in many states to shine his image. He tweeted, “Your crime is unforgivable. Instead of taking false credit, if you had actually worked on the ground, then the people of Delhi would not have been troubled nor would they have died due to lack of oxygen.” Earlier, replying to the BJP’s allegations, the Delhi Deputy Chief Minister Manish Sisodia accused the BJP of lying about such a report. “There is no such report,” he said. We have spoken to the members of the ‘Oxygen Audit Committee’ constituted by the Supreme Court. He said that he has not signed any such report. The BJP is presenting a false report, which has been prepared at its party headquarters. I challenge him to submit a report which has been signed by the members of the ‘Oxygen Audit Committee’.” He said by doing so, the BJP was not only insulting Chief Minister Arvind Kejriwal, but “those people”. Also insulting those who lost their family members during the havoc of Corona virus. He alleged that it was due to the mismanagement of the central government that the “oxygen crisis had arisen.” The second wave of Kovid-19 in April and May in Delhi was badly affected. During this, many people died every day due to lack of oxygen in various hospitals of the city.