After the defeat, Kohli said – New Zealand deserves to win, we scored 30 to 40 runs less 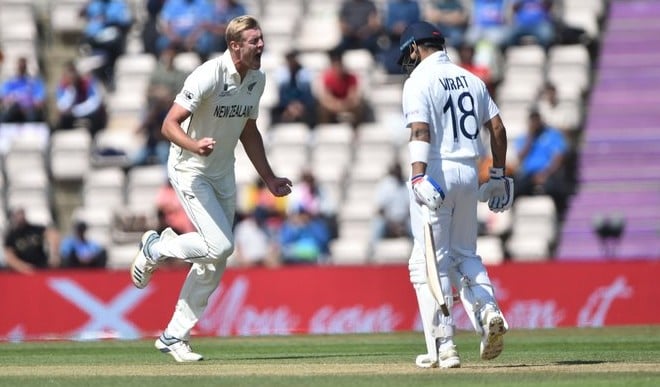 Indian captain Virat Kohli said that New Zealand deserves victory and we have scored 30 to 40 runs short. Kohli said that, congratulations to Kane (Williamson) and the entire team of New Zealand. He showed great spirit and achieved the result in a little more than three days.

Southampton. Indian captain Virat Kohli to New Zealand world test championship (WTC) deserved victory in the final and said here on Wednesday that the result could have been different had his team scored 30-40 runs more in the second innings. The Indian team was bowled out for 170 in the second innings. New Zealand got the target of 139 runs, which they achieved after losing two wickets with an unbroken 96-run partnership for the third wicket between Kane Williamson (52 not out) and Ross Taylor (47 not out). Kohli said, “Congratulations to Kane (Williamson) and the entire New Zealand team. He showed great spirit and achieved the result in a little more than three days. They put us under pressure. They deserved to win. He said, “New Zealand bowlers executed their strategy well. We scored 30-40 runs short.

The Indian captain said that his team’s rhythm was disturbed due to the interruption of rain. “The first day was washed out by rain, and it was difficult to find the rhythm when the game resumed. We lost only three wickets, but we could have scored more runs if the game went on smoothly.” New Zealand captain Williamson heaped praise on Kohli and the Indian team and called it a special feeling to be champions. Williamson said, “I express my gratitude to Virat and the Indian team. They are an incredible team, we knew how challenging it would be. I am happy that our team was able to register a win. “It is a very special feeling. For the first time in our cricket history we have won a world title. Every player who has been associated with our team in the last two years has played a part in this. This is a special achievement.”

ALSO READ: Vaughan and Pietersen lash out at Chance of not taking family along for Ashes series

Taylor said that he would remember the victory as one of the highlights of his career. “It rained a lot in the match but I can never forget the way our team came back from the initial struggle and came out victorious. There is no doubt that the pressure was enough but we batted accordingly. Team’s lead bowler Tim Southee said the players wanted a happy ending to the journey that began two years ago. Saudi, who took four wickets in India’s second innings, said, “We started this journey two years ago. It is special to sit here as a champion. It has taken a lot of hard work. It is satisfying to have what we have. Our two best batsmen were at the crease so we were calm. We wanted an end to (VJ) Watling’s cricket career with a happy ending to this tour. ”

Watling had already announced that he would retire from his international career after the WTC Finals. Watling said, “Our team has been working hard as a group for a long time and it has a satisfying ending. I am very happy that I am ending my career as a champion. I never imagined it.” Kyle Jamieson was adjudged man of the match for his brilliant bowling. “It’s a big moment for us,” he said. We knew that the first hour of play would be important for us today. We bowled in the right places. We knew that if we bowl the right length, it will ease our way to victory. I feel good that I contributed to the team’s victory.