17-year-old batsman will make ODI debut, India would like to compensate in white ball cricket 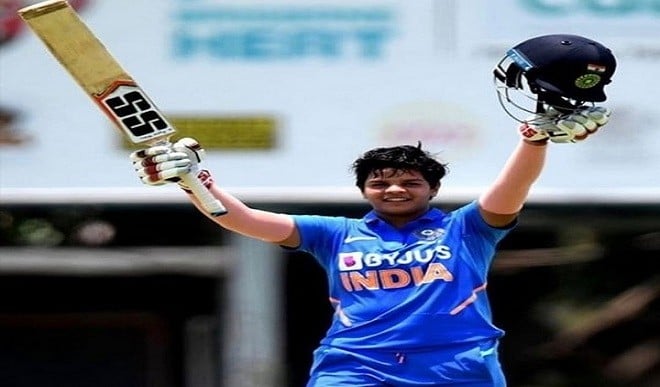 His explosive batting is certainly very important for the Indian team. There are no impressive players in the team except vice-captain Harmanpreet Kaur and she is also not in her best form.

Bristol. Indian women’s team Strong world champions England would look to put up a scintillating performance against England in the first match of the three-match ODI series starting here on Sunday with youngster Shafali Verma set to make her ODI debut. Shefali has played 22 T20 Internationals so far and this 17-year-old batsman has attracted world cricket with her performance. But Shefali was not picked for the last home series against the South African women’s team in which India suffered a humiliating defeat.

The team would like to make up for that last series with a stellar performance in this series. The Indian team lost 1-4 to South Africa and there was a lot of ruckus about Shefali’s ouster in that series. However, on Sunday, the Indian team management will not make any mistake like this, which has now come to know after seeing the scores of 96 and 63 runs in their Test debut against England last week. His explosive batting is certainly very important for the Indian team. There are no impressive players in the team except vice-captain Harmanpreet Kaur and she is also not in her best form. With defensive player Poonam Raut, skipper Mithali Raj at the top of the order, Shefali can make a big difference in the batting if she is in form.

The way Shefali played Anya Shrubsole, Katherine Brunt, Kate Krauss, Nate Sciver and Sophie Ecclestone, the home team’s coaching staff must be planning to stop this Haryanvi storm. It will be interesting to see what will be the composition of the Indian team which was heavily criticized in the series against South Africa. Priya Poonia did not do so well in the home series against South Africa and India have an option in the form of wicket-keeper batsman Indrani Roy, who has been selected in the team for her excellent performance in the domestic 50-over tournament. If Smriti Mandhana and Shefali open the innings, Indrani will have to wait for her chance as Poonam Raut with her good performance and slightly better strike rate would like to bat at No.3, followed by the captain and vice-captain at No.4-5. .

Also read: Indian hockey umpire ready for Tokyo despite ‘trouble’ due to pandemic

All-rounder Deepti Sharma is sure to be in sixth place and Tania will be a contender for her performance in the second innings against England, if a decision is taken between Tania Bhatia and Indrani. The economical Jhulan Goswami is set to be selected among the four bowlers and two will be picked from Shikha Pandey, Pooja Vastrakar and Arundhati Reddy. The Indian team has seen how Ecclestone troubled him with his ‘wicket-to-wicket’ spin bowling during the one-off Test, so Ekta Bisht or Radha Yadav can be preferred who have the same ability to bowl. If India decide to field a third spinner, Sneh Rana with his batting prowess and impressive off-break bowling could take on leg-spinner Poonam Yadav. If Poonam Yadav’s performance was not good against South Africa, then Sneh looks like a strong contender.